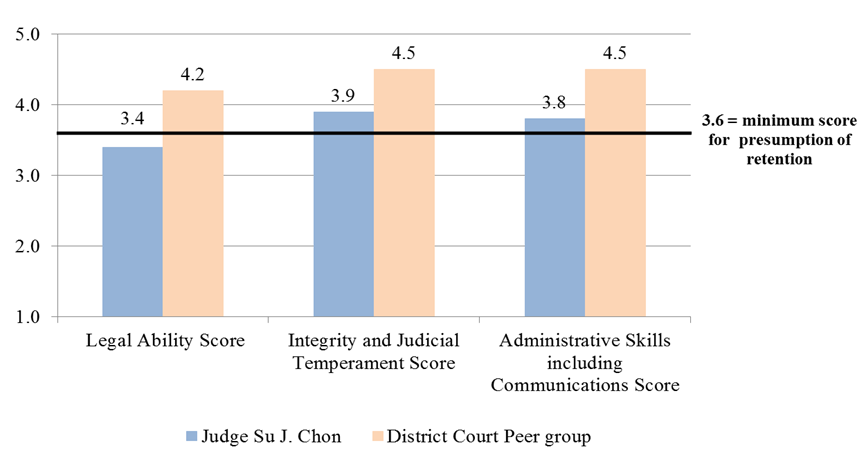 Appointed in 2012, Judge Su Chon fails to meet the minimum performance standard for legal ability and scores well below the average of her district court peers in all other survey categories. Survey respondents focus on her perceived weakness in following legal precedent, lack of meaningful legal analysis in written decisions, and slow decision-making. Some respondents view Judge Chon as a hard worker, noting her improvement over time. Others find her indecisive and unsure of her legal rulings, particularly in civil cases. Courtroom observers are more favorable but still mixed in their perceptions of Judge Chon. They commend her for attentive listening skills and the equal treatment of those appearing before her. Some see her as a no-nonsense professional who runs an efficient courtroom, while others perceive her as emotionally detached and somewhat intimidating. Half of the courtroom observers report they would feel comfortable appearing before her. Of survey respondents answering the retention question, 63% recommend that Judge Chon be retained.

The commission reviewed surveys and courtroom observation reports in addition to verifying that Judge Chon has met all time standards, judicial education requirements, and discipline standards established by the judicial branch.

Judge Su J. Chon was appointed to the Third District Court in August 2012 by Governor Gary Herbert. She graduated from BYU with a Bachelors of Arts in 1991 and a Juris Doctorate in 1994. Judge Chon has worked in small and medium law firms and served as a Property Rights Ombudsman for the State of Utah. Judge Chon received the Utah State Bar’s 2005 Pro Bono Lawyer of the Year Award and the 2008 Raymond S. Uno Award. She is a member of the American Bar Association and National Association of Women Judges. She serves on the Court’s Language Access and Community Relations committees and is the co-chair of the Utah Bar’s Modest Means Committee.

Governor Herbert appointed me in 2012, and the majority of those reviewing me voted to retain. I ask you to retain me. I feel fortunate to have been welcomed into this country as a child. My grandfathers were tortured and mistreated because North Korea refused to uphold the law – this drives the person and judge I am today. My family’s experiences inspire me to carefully and fairly apply the rule of law. I respect the process, and I work hard. My rulings have not been overturned on appeal. Thank you for your support.