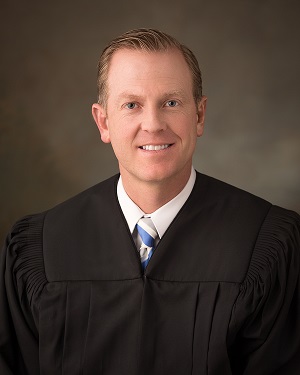 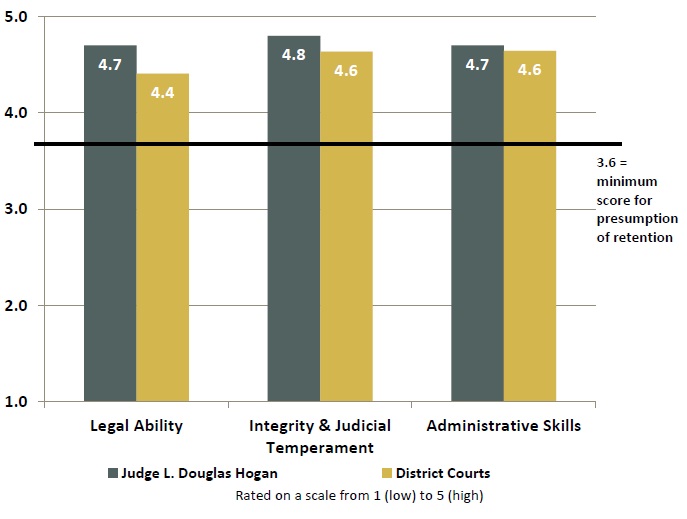 Appointed in 2014, Judge L. Douglas Hogan’s scores are statistically above the average of his district court peers on legal ability, integrity and judicial temperament, and procedural fairness. In administrative skills, Judge Hogan’s scores are consistent with his peers. Ninety-seven percent of survey respondents recommend Judge Hogan for retention. Respondents and courtroom observers broadly agree that Judge Hogan’s temperament and judicial demeanor are excellent. In addition, they remark on how respectfully and consistently he listens to all participants, giving each ample opportunity to be heard and demonstrating genuine interest in their lives. When rating attributes that describe Judge Hogan, respondents identify several as particularly descriptive: attentive, capable, impartial, and knowledgeable. They also characterize him as notably patient and decisive. Courtroom observers are solidly confident they would be treated fairly if appearing before Judge Hogan. This judge meets discipline standards set by statute and has been certified by the Judicial Council as meeting all time standards, education requirements, and mental and physical competence standards.

Judge L. Douglas Hogan was appointed to the Third District Court by Governor Gary Herbert in 2014.  Judge Hogan received a juris doctorate with distinction from the McGeorge School of Law at the University of the Pacific in 1999.  He completed his undergraduate studies at the University of Utah.  Judge Hogan’s private practice included serving as a public defender for Tooele County from 2001 to 2006, where his duties included representing indigent participants in drug court.  He has also worked as conflict counsel for the Salt Lake Legal Defenders Association. In 2006, Judge Hogan was elected as Tooele County Attorney where he served for eight years.  He currently presides over a criminal calendar and Felony Drug Court in West Jordan.