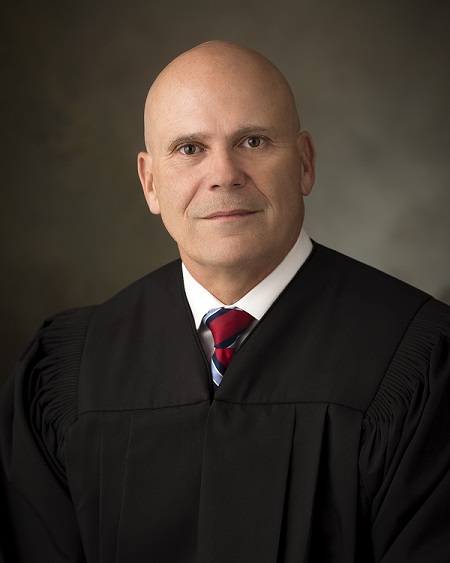 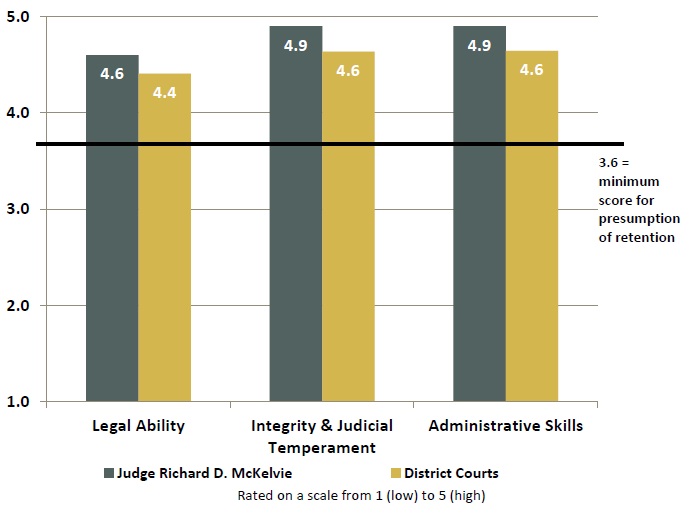 Appointed in 2014, Judge Richard D. McKelvie scores statistically well above his district court peers on integrity and judicial temperament, administrative skills, and procedural fairness, and above his peers on legal ability. Ninety-seven percent of survey respondents recommend Judge McKelvie for retention. Respondents and courtroom observers describe Judge McKelvie as being unusually talented at balancing efficient courtroom calendar management with the patient, careful attention necessary to ensure each litigant is thoroughly heard and has their ‘day in court.’ They also agree that Judge McKelvie has an excellent temperament and remarkable ability to demonstrate equal respect for all participants. In the words of one respondent, “Win or lose, it is a pleasure to appear before [Judge McKelvie].” When rating attributes that describe Judge McKelvie, respondents identify several as particularly descriptive: open-minded, capable, and ethical. They also characterize him as notably respectful, decisive, and prepared. This judge meets discipline standards set by statute and has been certified by the Judicial Council as meeting all time standards, education requirements, and mental and physical competence standards.

Judge Richard D. McKelvie was appointed to the Third District Court in 2014 by Governor Gary Herbert. He serves Salt Lake, Summit and Tooele counties. Judge McKelvie graduated from Weber State College and from the University of Utah College of Law. Judge McKelvie became a Deputy Salt Lake County Attorney in 1981. In 1988, he became an Assistant Attorney General for the State of Utah and Assistant Director of that office’s Statewide Prosecution and Illegal Narcotics Enforcement.   He became an Assistant United States Attorney in 1990. Judge McKelvie is director of the Trial Advocacy Program at the S.J. Quinney University of Utah College of Law, a position he has held since 2008. In 2011, he earned the law school’s Excellence in Teaching Award.