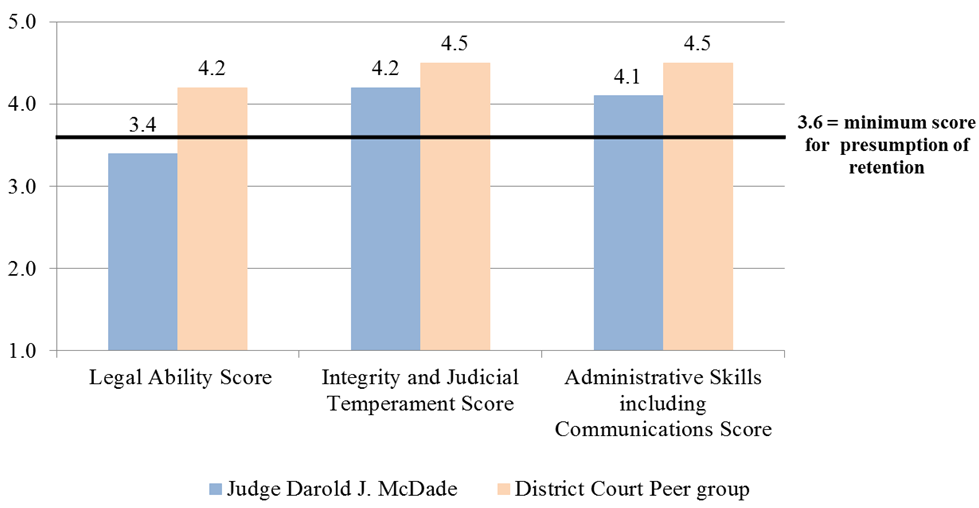 Appointed to the bench in 2007, Judge Darold McDade fails to meet the minimum performance standard for legal ability and scores below the average of his district court peers in all other survey categories. Survey respondents express doubt about the depth of Judge McDade’s legal knowledge and his ability to properly adjudicate complex matters. They question the clarity and reasoning of his oral and written rulings. Respondents, however, also acknowledge that Judge McDade is consistently respectful, kind, and polite. They characterize him as humble, calm, and a good listener. Courtroom observers similarly praise Judge McDade’s judicial demeanor, with all reporting they would feel comfortable appearing before him. Of survey respondents answering the retention question, 71% recommend that Judge McDade be retained. Based on the mixed nature of the data, the Judicial Performance Evaluation Commission gave Judge McDade a 7-5 vote for retention.

The commission reviewed surveys and courtroom observation reports in addition to verifying that Judge McDade has met all time standards, judicial education requirements, and discipline standards established by the judicial branch.

Appointed to the Fourth District Court in 2007 by Gov. Jon M. Huntsman, Jr., Judge Darold J. McDade graduated from BYU’s J. Reuben Clark Law School in 1990. Prior to his appointment, he worked in the Utah Attorney General’s Office as a section chief in the Child and Family Support Division, representing the Office of Recovery Services. He volunteered as a judge pro tem in the Fourth District small claims court from 2004- 2007. Judge McDade was an elected member of the Pleasant Grove City Council from 2000-2007 and is a member of the Navajo Nation Bar Association. He currently sits on the Supreme Court Advisory Committee on the Rules of Professional Conduct and serves as Associate Presiding Judge of the Fourth District.