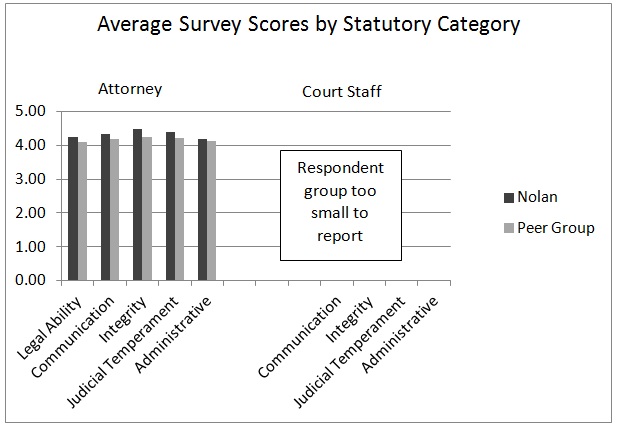 Judge C. Dane Nolan is an experienced judge who received very strong survey scores. Attorneys rated Judge Nolan higher than the average of other juvenile court judges in all survey categories. Judge Nolan’s commitment to self-improvement is evidenced by a marked improvement since his midterm evaluation in courtroom administration. Attorneys described him most frequently as knowledgeable, intelligent, and calm; their comments characterized him as courteous, well-prepared, and capable. Of the 42 attorneys who responded to the retention question, 35 (83%) recommended that Judge Nolan be retained. Five courtroom observers also evaluated Judge Nolan; all were positive, noting especially that the judge demonstrated genuine care and dedication to the interests and progress of each participant in his courtroom.

The commission reviewed surveys and courtroom observation reports in addition to verifying that Judge Nolan has met all time standards, judicial education requirements, and discipline standards established by the judicial branch.

Judge C. Dane Nolan was appointed to the Third District Juvenile Court in 2003 by Governor Michael O. Leavitt. Judge Nolan received a law degree from the University of Utah College of Law in 1986. He practiced law at the Utah Legal Clinic, the Utah Attorney General’s Office, and the Salt Lake County District Attorney’s Office. Judge Nolan was a founding member of the Utah Minority Bar Association, has served as chair of the Judicial Conduct Commission, and as a member of the Utah Judicial Council and the Juvenile Court Board of Judges. He currently serves on the Governor’s Mental Health Initiative and the Juvenile Competency Committee. Since 2006, Judge Nolan has presided over Utah’s first Juvenile Mental Health Court.